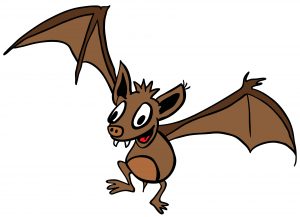 Many people incorrectly assume that bats are blind. The truth is, no species of bat is naturally blind. In fact, most bats have pretty good vision. However, some bats rely on other senses more than they do their eyesight to navigate during flight. If you just learned something new about bats, you will be interested in what comes next.

Continue reading to learn more about bats and how they see!

Both primary categories of bats, Megachiroptera and Microchiroptera, are nocturnal. This means they are active between dusk and dawn, and rest between dawn and dusk. Although it is dark outside when they are active, both bats can still see. They can even see well during the day. They are sensitive to daylight changes, however, which is how they sense it is time to start or stop their day.

Echolocation and Other Senses

Because bats are active at night, many people wrongly assume that bats can’t see at night, so they only use echolocation (a natural sonar practice using series of tongue clicks) to navigate around. Although Microchiroptera use echolocation, it is not their only means of vision. They use echolocation to hunt for prey and navigate during flight, but they can also see quite well. In fact, they rely more on their vision to see long distances since these distances are beyond the range of echolocation. Megachiroptera bats, on the other hand, do not use sonar at all, and only rely on their eyesight, hearing, and smell to get around.

Bats are Not Blind!

So in conclusion, bats are not blind after all. Microchiroptera bats have sufficiently-developed photo-receptor cells in their retinas (cones and rods), which allow them to see well during the day and the night. Also, Megachiroptera bats have large eyes and well-pronounced visual centers that allow them to see well. Both species of bat use all their senses to navigate around, just like humans. But some species rely on senses more than others.

Call 502-553-7622 for Louisville bat removal and control you can trust. We are DNR licensed and insured bat control contractors who use safe, non-lethal methods of extraction and exclusion. We serve both residential and commercial clients, and at the most competitive prices in town. Emergency 24 hour service is also available. Call 502-553-7622 to request a free estimate, today.