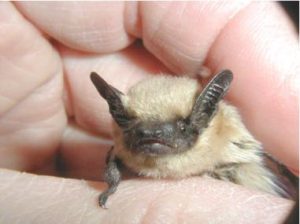 The Western Pipistrelle, or Pipistrellus Hesperus, is also known as the “Canyon bat.” It is an interesting bat because it is the smallest bat found in the United States, weighing between 3 and 6 grams. This insectivorous bat is known for its distinguishing habit of dining early in the evening. They are generally the first ones out of the roost, foraging for small swarming insects like moths, flies, beetles, mosquitoes, and wasps, hours before other microbat species. If you would like to learn some more fun facts about the Western Pipistrelle, continue reading and indulge yourself!

The Western Pipistrelle is covered in fur (excluding their wings) that ranges in color from reddish hues to medium browns. They have white or light-colored underbellies, black faces, a club-shaped tragus, and tiny black ears that stand straight up at the sides and tops of their head. Their wings are hairless, and are short and broad (between 7 and 9 inches wide), giving them agile flying abilities.

The Western Pipistrelle are generally found in rocky areas near water sources, like canyons, caves, and cliffs; and can sometimes be found living under loose rock beds. Regionally, they are found across Washington through the western United States, and to southern parts of Mexico. Their hibernation practices are still unclear, as many researchers have speculated that colonies travel short distances to warmer climates; but we do know they hibernate in caves, old mines, and crevices of rock.

Western Pipistrelle bats live an average of 10 to 13 years in the wild. Unlike other bat species, they do not form large maternity colonies for the purpose of reproduction. Instead, female bats will share large rock crevices with other gestating females. One pup is born at a time, usually between early and late summer.

The Western Pipistrelle is not currently listed as an endangered or threatened species, as it is one of the most common species of bat in many southern regions. Common predators include some species of owl and even other larger bat species.

Call 553-502-7622 for prompt and professional bat removal services in Louisville, Kentucky and its surrounding areas. We are DNR licensed bat removal contractors that offer safe and non-lethal bat extraction and exclusion services for residential and commercial properties. We also provide bat cleanup and minor attic restorations for bat damages too.