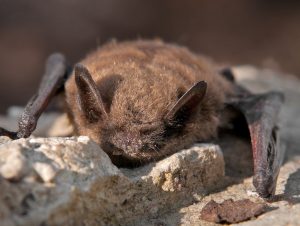 The Little Brown Bat is one of the most common species of bat found around Kentucky. Not only do they provide several economic and ecological benefits for our society, they are very interesting to learn about.

Continue reading to review some basic information about Little Brown Bats, including their scientific name and classification, as well as, their diet, range, habitat, and more!

Little Brown Bats are microbats, meaning they are nocturnal, generally small, and primarily retain an insectivorous diet of insects and other bugs. They can consume 50% of their weight in insects! And during gestation or lactation, they eat even more. Breeding season is generally around September and October, but females actually store the male sperm for springtime fertilization, making baby bats born in the summer. Gestation is generally 50 to 60 days, and once born, sexual maturity is reached between 6 and 8 months. Females generally give birth to just one bat pup a year, but sometimes two.

The Little Brown Bat, sometimes referred to as Little Brown Myotis, is scientifically named Myotis lucifugus. Myotis refers to a “mouse-eared” genus of bat. They are among the most common bats found in North America. Above, they are covered in shiny brown, sleek-looking fir, with a lighter patch of fir below. They are usually around 3 to 3 ½ inches in length and weighing only a fraction of an ounce, between 1/8 and ½ ounces. So needless to say, their name says it all because they are little for sure! Although small, their average wingspan will surprise you, as it is more than double their body length, averaging between 6 to 8 inches in width. But what’s even more interesting is that they can live up to 30 years or more, average between 20 and 30 years specifically.

Little Brown Bats use a system of sonar called echolocation, combined with their acute sense of hearing, to locate and hunt down prey. Echolocation is a natural built-in sonar system for bats. They send off sounds that make a mental-grid of their surroundings by bouncing off objects and returning to the bat. They also communicate with one another through a complex series of chirps, beeps, and high-pitches sounds; most of which are not detectable by human ears.

If You Have a Nuisance Bat Problem… 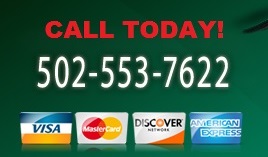 Call 502-553-7622 for Louisville bat removal and control you can trust. We are DNR licensed and insured bat control contractors who use safe, non-lethal methods of wildlife extraction and exclusion. We serve both residential and commercial clients, and at the most competitive prices in town. Emergency 24 hour bat removal service is also available. Request a free estimate, today. 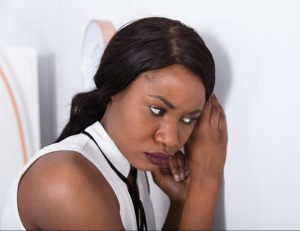 One of the most incredibly fascinating facts about bats is that they are the only mammals on Earth that can actually fly! Unfortunately, this gift of flight is what gives them easy access to residential and commercial real estate. This time of year, bats are searching for warm shelters to roost and hibernate for the winter. Common target areas include high-up places, like attics and roofs, where bats can make a safe, warm home for the season.

Why are Bat Infestations a Big Deal?

First, bat species that are native in the Kentucky region are not solitary mammals. This means they come in large quantities. Now combine a large colony of bats with the type of destruction they cause, and you instantly have a costly and frustrating situation on your hands. You see, once bats get inside, their natural behaviors of feeding, breeding, and nesting, negatively impacts the overall value and structural integrity of a property.

The longer a bat infestation goes unnoticed, the more damage they do. Their droppings will saturate and soil everything it comes into contact with, and even start to seep into walls and ceilings, and lead to foul, lingering odors. Sheet rock, ceilings, dry wall, insulation, roof shingles, siding, and more can also be damaged by bat infestations and nesting.

How to Look for Signs of Nuisance Bat Activity

If you suspect that you have a bat problem, contact a licensed Louisville bat removal and control company for prompt and professional wildlife abatement services. If you are not sure whether or not you have bats around, do a brief inspection of your property to look for the common signs of a bat infestation. Here’s what to look for:

Bats are nocturnal, so you will not be very successful listening for noises at night. This is when they leave their roosts and hunt for insects. Instead, do your investigating during the early morning hours when they are returning to their roosts. Listen carefully to the walls, ceilings, and attics for odd noises of activity. Bat noises generally sound like fluttering, squeaking, screeching, chattering, and shuffling.

Aside from actually seeing bats, the most distinct indication of a bat infestation is finding accumulations of bat droppings, also known as guano. You may see mouse-like droppings around window sills and eaves, since bats like to perch in these areas when coming and going from their roosts. You may also find piles of guano in the attic, crawl space, or garage areas. Bat guano is similar to rodent droppings, except it is shiny and speckled from digested insect parts.

When bat urine and guano accumulate in large masses within a roost, eventually the odors and liquids will seep into the living areas of the property. Walls and ceilings are common areas where droppings will stain. If you have brown or yellow shaded stains on your ceilings or walls, it is a strong indication of a bat infestation above.

As mentioned, bats like to perch on window sills and eaves. And in these areas, you might find milky urine stains dripping down the windows. These stains will also be sticky and odorous, and attract other pests, like gnats and flies.

Bats fur contains a natural oil that can retain dirt, and as a result, leave behind grease-like stains around their entry and exit points. If you see small gaps, openings, or holes with dirty smudges around them, it is very likely that you’ve found a bat roost.

Call 553-502-7622 for prompt and professional bat removal services in Louisville, Kentucky and its surrounding areas. We are DNR licensed bat removal contractors that offer safe and non-lethal, 24 hour bat extraction and exclusion services for residential and commercial properties. We also provide bat cleanup and minor attic restorations for bat damages too. Request a free estimate, anytime.